Journalists gather during the BBC Nairobi bureau launch on November 5.

BBC Africa on Monday unveiled Mitikazi Leo, a business news programme that broadcasts from its continental bureau in Nairobi.

It is the latest programme by the British broadcaster which last month officially opened its largest news bureau outside the UK in the Kenyan capital.

A Health and lifestyle programme, Life Clinic – BBC Maisha is set to be launched soon.

Close to 300 of the 600 BBC journalists working across Africa are based in the new state-of-the-art facility. Recently-launched language services in Afaan Oromo, Amharic and Tigrinya operate in the new Ksh 1 billion Nairobi bureau, alongside well-established BBC services in Somali, Swahili and English.

Africa Eye has already made a huge impact. An investigation into corruption in football uncovered a referee bound for the 2018 World Cup – and made headlines around the world. An in-depth report into a ‘rehabilitation centre’ in Somalia revealed the serious abuse of children.

The production facilities at the bureau include a TV studio and two further live broadcast positions, two radio studios, two radio workspaces and five edit suites. The BBC World Service now delivers a total of 12 African languages, plus English. The new investment is part of the largest expansion of the BBC World Service since the 1940s, funded by the UK government.

Since the start of the BBC broadcasts to East Africa in Kiswahili and Somali in 1957, audiences in the region have relied on the BBC to bring impartial news and information – and to take news about the region to the rest of the world. With the opening of its Nairobi bureau in 1998, BBC World Service became the first international broadcaster to establish a news production bureau in Kenya. 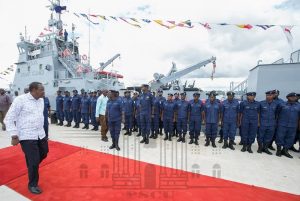