[dropcap]F[/dropcap]or the first time, the African Cup of Nations (AFCON) finals will feature 24 teams creating slots for more teams to play in the biennial continental extravaganza. The expansion of the tournament from 16 teams to gave opportunities to teams that would not have otherwise qualified if the changes were not made.

Kenya was also a bit lucky in qualifying but the team has evolved completely because of the tournament. This year’s edition of the AFCON will see the highest number of East African teams than witnessed before.

We take a look at all the teams that have prevailed in their supremacy battles ahead of the tournament. Who has a better chance of winning the tournament?

1. Egypt (The Pharaohs)
The home team would definitely be the favourite to clinch the title given the positivity they have had in most competition. Egypt, however, is run by Mohamed Salah, who inspires the whole team to perform well. The Liverpool FC striker has helped Egypt achieve more including a sensational last-minute World Cup qualification. The team, having qualified for the AFCON 23 times and winning it seven times, is optimistic now that they will be hosting the finals.

2. Senegal (The Lions of Teranga)
As at the end of 2018, Senegal was the top-ranked team in Africa, according to FIFA. This team has a chance of winning the AFCON Cup because of the strength of its squad. A majority of Senegalese players play in most of the elite leagues in the world, mostly in Europe. Led by their Captain Sadio Mane (Liverpool FC), the team has a huge number of superstars including Kalidou Koulibaly (Napoli FC), Cheikhou Kouyate (Crystal Palace FC) and Idrissa Gana Gueye (Everton FC) just to mention a few. The Lions of Teranga have never won an AFCON title, which is the reason they are to be feared in this outing.

3. Tunisia (The Carthage Eagles)
They are currently the top team in Africa, according to the latest FIFA rankings. The team showed the most promise of all African teams at the World Cup with their beautiful football. The Carthage Eagles always display entertaining football because most of the players play in the local league hence the special chemistry among them. With no known superstar in the team, Tunisia is still a threat because of their team spirit. Naim Sliti who plays for France’s Dijon FC deserves an honourable mention. 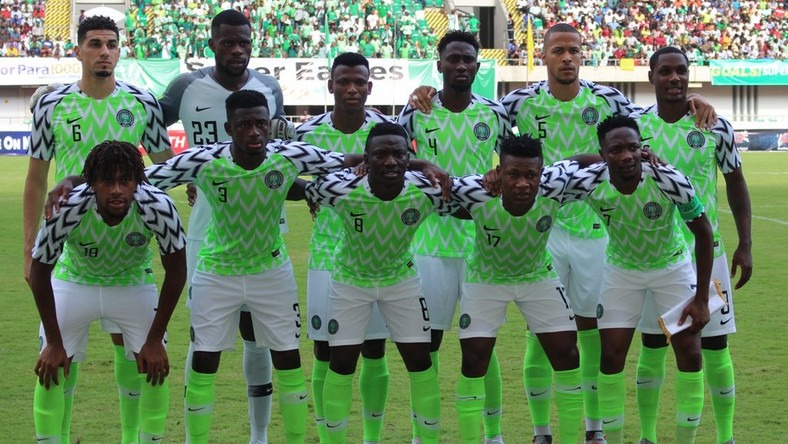 They entered the World Cup with everyone’s attention on them because they had the most beautiful jersey in the competition. The Super Eagles’ performance, however, did not match their jersey’s status. The team has played in the AFCON 17 times and have managed to clinch the title thrice. Ahmed Mussa (Al Nassr), Alex Iwobi (Arsenal FC) and Wilfred Ndindi (Leicester City) deserve mentions.

5. Algeria (The Desert Warriors)
Nicknamed the Desert Warriors, the North African team boasts a good number of talented players and just like Tunisia, they have a chemistry. The team is expected to be led in attack by Manchester City forward Riyad Mahrez and Leicester City’s Islam Slimani. They have made 18 appearances in the AFCON but have only won it once.

6. Ghana (The Black Stars)
Apart from Senegal, the Black Stars are known as the only other African team to have made it to the World Cup quarterfinals hence one of the most feared African teams in the world. In Africa, Ghana receives the same respect but most African teams know how they play hence the team can be surprised at any time as they were surprised by Kenya who beat them 1-0 in the qualifiers. They have made 22 appearances in the continental tournament and have lifted the cup four times. They will be under the stewardship of Captain Asamoah Gyan.

7. Ivory Coast (The Elephants)
When talking about Ghana, one name that comes to mind is football legend Didier Drogba who achieved a lot on the football scene. Ivory Coast still has a few talented footballers who the team will be relying on for spectaculars. Some top talents in the squad include Crystal Palace’s Wilfred Zaha and Fulham’s Jean Michael Seri. They have appeared in the tournament 22 times winning it twice.

9. Morocco (The Atlas Lions)
Just like most Arab African teams, Morocco is known for its beautiful display of football. They were recently among the five African teams in the World Cup. They, however, have just one AFCON title out of the 16 times they have played in the tournament.

10. DR Congo (The Leopards)
The two-time African champions will be entering the AFCON on a high having improved tremendously in their FIFA rankings. They are now ranked 4th in Africa. They will be hopeful that their high calibre squad members like Yannick Bolasie (Anderlecht) and Arthur Masuaku (West Ham United) will assert their authority at the tournament.

11. Mali (The Eagles)
They have made 10 appearances in the continental tournament but are yet to clinch an AFCON title. The team will be depending on the likes of Adama Traore (Cercle Brugge) and Moussa Marega (FC Porto).

Ever since South Africa hosted the 2010 FIFA World Cup, their football has improved and they cannot be ruled out for a surprise victory at the 2019 AFCON. Their renewed energy is key to helping Bafana Bafana clinch their second African title to add their sole 1996 success. The chemistry in the team is good coming into the competition as a majority of the players play in the local league which is also highly rated.

Leading the attack line, Bafana will be depending on Belgian side Royale Union Saint-Gilloise’s frontman Percy Tau and midfield power from Mamelodi Sundown’s Hlompho Kekana.

13. Guinea (National Elephants)
Of all the 11 times Guinea has competed in the AFCON, they are yet to clinch the title. The West African team qualified this year after finishing second in Group H of the qualifier behind group leaders Ivory Coast. They will be relying on the expertise of Liverpool’s Naby Keita and Fulham’s Ibrahima Cisse to deliver a masterpiece.

14. Kenya (Harambee Stars)
The football environment in the country has positively changed after the team qualified for the tournament for the first time in 15 years. Although Kenya qualified after Sierra Leone was disqualified, they are in the competition to prove that they would have still qualified with Sierra Leone in the competition. The Harambee stars have participated in the AFCON five times but are yet to make it to the knockout stages on all occasions.

Making it to the knockout stages will break records in the country but winning it will make the players national icons to be remembered for years to come. Top players expected to deliver for the Harambee Stars are Tottenham Hotspurs’ Victor Wanyama and Kashiwa Reysol’s Michael Olunga.

15. Uganda (The Cranes)
The Uganda Cranes have had a successful campaign in the qualifiers finishing first in their group only conceding against their neighbours Tanzania, who also qualified. Uganda has played in the AFCON six times but is yet to clinch the title. Among top talents in the team are Khalid Aucho (Churchill Brothers) and goalkeeper Denis Onyango (Mamelodi Sundowns).

16. Benin (The squirrels)
Benin has participated in the AFCON thrice and failed to make it to the knockout stages in all the occasions. In their fourth quest for African glory, Benin will be depending on the expertise of the like of Huddersfield’s United Steve Mounie and Lens defender Djiman Koukou.

17. Mauritania (The Lions of Chinguetti)
Mauritania is making their first appearance in the AFCON this year. Ranked number 101 in the FIFA rankings, they may just prove to be a good African side. Any achievement for them in the tournament will make history. Top talents in the squad include Moulaye Besam of Tunisia’s AS Gabes and Real Valladolid’s Hassan El Ide.

18. Namibia (The Brave Warriors)
They have played twice in the AFCON failing to reach the knockout stages on both occasions. A majority of their players play in South Africa’s Premier League Soccer (PSL) so they might have just what it takes to make an impact in the tournament. Top talents include Henrik Somaeb of Serbia’s Zemun and Deon Hotto, who features for the Golden State Arrows.

20. Tanzania (Taifa Stars)
This year, the East African country qualified for the AFCON for the first time in 39 years. Having played in the competition only once, Tanzania will be hoping to at least reach the knockout stages as they did not make it to the knockout round in their last campaign. Top talents in the squad include Simba FC’s John Bocco and Thomas Ulimwengu, who plays at Sudanese club Al Hilal.

21. Zimbabwe (The Warriors)
Zimbabwe will be making their second consecutive AFCON appearance after participating in the 2017 tournament in Gabon. Hopefully, they have learnt from their mistakes and will make it to the knockout stages this time. The Warriors have participated in the competition thrice but are yet to get past the group stages. They will be depending on the expertise of Marvelous Nakamba (Club Brugge) and Knowledge Musona (Anderlecht).

Just like Zimbabwe, Guinea Bissau will be making their second consecutive appearance in the AFCON this year. They  failed to get past the group stage in 2017. This year, the team will be hoping that their top players such as Frederick Mendy (Vitoria de Setubal, Portugal) and Zezinho Djafal (FK Senica, Slovakia) will help them to at least make it to the knockout stages.

23. Angola (Giant Sable Antelopes)
Angola has a high number of AFCON appearances having participated seven times. They are, however, yet to win the title. Top players include Djalma Campo (Alanyaspor, Turkey) and Herenilson (Petro de Luanda, Angola).

24. Burundi (The Swallows)
Burundi will be making their first AFCON appearance. They are, however, not to be underrated as they beat Gabon to qualify for this year’s tournament. Top players include Stoke City’s Saido Berahino and Fiston Abdul Razak, who plays for Algeria’s JS Kabylie.