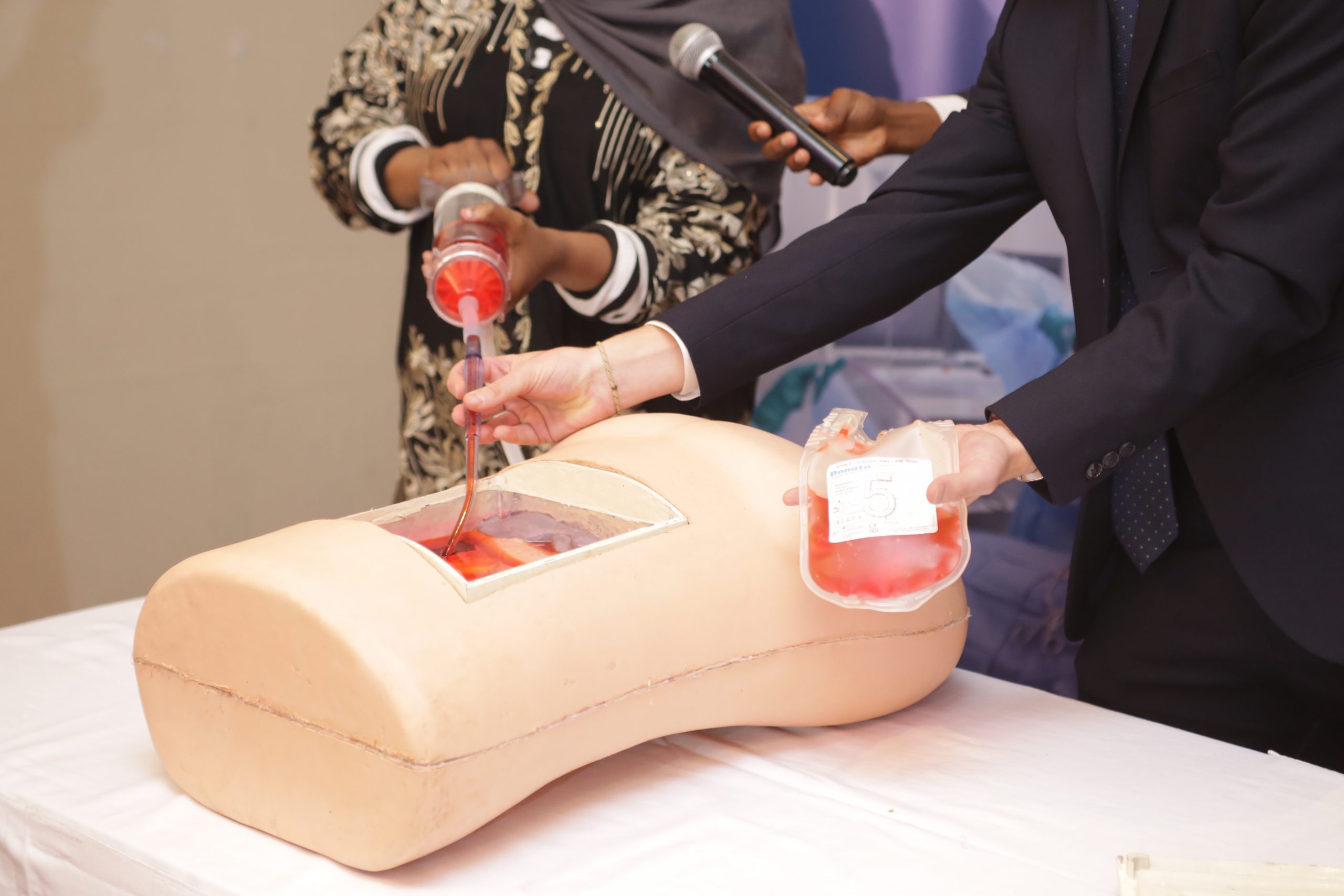 A demonstration of how Hemafuse works. Hemafuse is, an autotransfusion medical device that allows for blood to be retransfused into a patient who is undergoing surgery. [Photo/Sisu Global Health]

An emergency surgery, your spleen or liver ruptures, and you are losing blood profusely. Out of the blue, you need blood to cover up for the internal hemorrhaging; but, there is no blood in the bank that fits your blood type.

The direness of the situation now has a life-saving solution, as Hemafuse, a medical device that allows for surgical teams to harvest and refill your own blood back to you has been launched in Kenya.

Developed by Sisu Global Health and in partnership with Amref Health Africa in Kenya and Surgipharm Limited, the device, which is already in use in Kenya, was launched in the country on September 17. This makes Kenya the first African country where the innovation has received official acclaim. It is also being used in Ghana.

Through autotransfusion, a process where a patient’s own blood is used as an alternative to blood donation, the medical procedure can be used in cases of emergencies such as ectopic pregnancy, or a raptured internal organ such as the spleen or the liver.

Sajju Jain, Sisu Global Health chief operating officer said, “Autotransfusion is the practice of salvaging the blood you as a patient are losing due to hemorrhaging.”

Dr. Meshack Ndirangu, Amref Health Africa in Kenya Country Director reiterated the same, adding, “Autotransfusion provides a unique opportunity to provide people in need of blood with their own blood for re-transfusion.”

“No person should die because we could not find blood for them,” he added.

Hemafuse is a product that can filter and pump blood from internal haemorrhage into a blood bag, allowing it to be re-transfused to the same patient.

It uses the autotransfusion process but in a much more effective and affordable way than it has been done before, according to Sisu Global Health COO.

Sajju said, “The reality of the situation today is people are dying because of a shortage of blood. To solve this problem, we will need multiple approaches.”

According to Sajju, the medical procedure has been in practise for hundreds of years, with one of the earliest forms — that is still in use to this day — being the scoop and sieve model.

“This is where a doctor used a stainless steel cup or soup ladle to delicately scoop blood that is within the cavity so that it doesn’t damage the organs,” adding that the medical practitioner then rolls a white bandage and uses it as a sieve to catch the clots.

Another way of autotransfusion is through the use of an automated machine which conducts the process. The machine itself is valued at an average of Ksh3 million, and to use it costs around Ksh40,000 — excluding the fees for the specialist technicians required to operate it.

“Only the few elite can afford this, especially when you consider the target market in Africa,” said Sajju.

It is on this backdrop that the three co-founders of Sisu Global Health — Carolyn Yarina, Gillian Henker, and Katie Kirsch — sought to find a more cost effective solution. Through research , trials and regulatory approval (such as ISO Certification and approval from Kenya’s Pharmacy and Poisons Board (PPB)) that Sisu Global Health developed and trademarked the Hemafuse.

In turn, one Hemafuse system goes for around Ksh20,000, according to Surgipharm Director of Sales and Marketing, Rakesh Vinayak. The system has already been sold to some county government hospitals. According to Sisu Global Health, it needs no specialist technicians to operate and is viable in hospitals and medical facilities that have a surgical team of three.

How Hemafuse Ensures You Donate Blood to Yourself

The Hemafuse system looks like a huge syringe and consists of a pump and filter accessory kit, which features both an outlet port and a suction connector. The suction connector is what pulls blood from a surgical patient, while the outlet port empties it into a blood bag, taking around five to eight minutes to fill.

“This is a viable process. This does not require sophisticated machinery. This can be done in any theatre in Kenya,” said Sajju Jian. A single unit of the Hemafuse device can be used 25 times.

Reducing the Cost of Healthcare in Kenya

The launch of the Hemafuse in Kenya comes at a time when donors are directing funds away from blood services.

“At the end of this month (September), Kenya will start feeling the brunt of a blood shortage following the withdrawal of the US government’s funding towards blood services. The looming shortage of this precious and life sustaining product is indeed a matter of grave concern for all Kenyans,” said Dr. Ndirangu.

The Amref Health Africa in Kenya Country Director added, “Even before the withdrawal of funding by the US government, Kenya was already in the red as far as the availability of blood is concerned. Data from the Kenya National Blood Transfusion Service (KNBTS) shows that Kenya is not meeting its target blood collection.”

According to Dr Ndirangu, the World Health Organisation recommends that national blood banks should collect a unit of blood from at least 1% of the population every year to be considered blood-sufficient. “This means that with current population estimates of 50 million people, Kenya should collect about 500,000 units of blood per year. At a little over 160,000 units collected each year, Kenya is a long way from being blood sufficient.

Dr. Ndirangu also hailed the launch of Hemafuse as a way to significantly reduce the costs of healthcare. “It’s important to talk about treatment access programs. Access programs bring more affordable medicines.We need to bring down the cost of surgery.”