Businessman Peter Kuguru (above) says the fall of his beverages business does not mean the end of the world. Photo / bdafrica.com

The deregistration of Softa Bottling Company by the Registrar of Companies last Friday marked the end of a dream by a man who dared take on a global giant, almost succeeding in the process. Peter Kuguru targeted the low-end of the market with his Softa Soda, which proved to a popular proposition.

However, without financial muscle, he was unable to boost the beverage business and ward off a strong onslaught from Coca-Cola, which has a well-oiled marketing and distribution channels, and other established brands like Pepsi.

Kuguru went out looking for a joint investor but failed, and in November 2016, the company announced it was exiting the market after diversification into manufacturing of bottled water, and even production of sanitary pads and diapers failed to sustain operations.

With the fresh capital, Kuguru had planned to relaunch Softa Bottling under new management and product portfolio. The company, which will cease to exist in three months, owned a manufacturing plant with a capacity to produce 500 cases per hour.

Its factory consisted of a bottling line, water treatment plant, syrup room, chiller, carbon dioxide plant, crates, bottles, and boilers. According to the businessman, not all the assets were sold after the company went under, saying what is left of the plant is now owned by Kuguru Foods.

Softa, which operated for two decades, also owned a plant with a capacity of 1,500 crates per hour but which was later decommissioned and put on sale. When he started, Kuguru had hoped to raise capital by listing a bond on the Nairobi Securities Exchange as he eyed expanding operations to the Comesa region and Somalia.

However, he says that while his venture failed, he learned crucial lessons in the process. “We have been in many businesses, some succeed and others fail. But we never give up,” he said in an interview with Daily Nation.

Kuguru hopes to make a comeback in the future especially if the government addresses the use of plastic bottles, which have been blamed for the rise in cancer cases. The plant can, however, also be converted to manufacture alcohol, among other uses.

In the meantime, he has shifted his focus to real estate and milling through Cateress Milling and Just Real Estate. Cateress Milling produces Mpishi and Cateress maize flour brands Cateress mostly distributed around the Nairobi area while Mpishi is also found in Central, Rift Valley, and Eastern regions.

“When a business is not making the returns as required, you can always invest elsewhere. My spirit is not dampened,” he says.

Kuguru first ventured into business in 1987 when he founded Kuguru Foods Company with his wife.

Apart from soft drinks, including ready to drink fruit juices, the firm also produced Chibuku, a South African Sorghum beer, originally operated by the multinational Lonrho in Kenya as well as plastic packages. 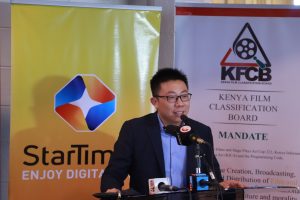