Kenya Airways, the national carrier, is struggling with debts and losses running into billions of shillings.

The Kenya Aviation Workers Union strike seems to be bringing aviation officials in the country back down to earth. With the industrial striking a major blow, KAWU revealed salaries of 21 individuals within the top hierarchy of national carrier Kenya Airways.

The figures, which we could not independently verify, offers a glimpse into the hefty salaries that foreign expatriates working for the airline are paid even as the national carrier struggles with debts and losses running into billions of shillings.

A combined total of Ksh70.5 million monthly  for 21 individuals, means the expatriates offloaded a cool Ksh1.3 billion from Kenya Airways coffers over the course of 18 months.

With their eyes firmly fixed on the top leadership at KQ and the Kenya Airports Authority (KAA), the allegations by KAWU have raised questions about CEO Sebastian Mikosz’s management. Built up as having a more exposed experience by coming from foreign, more developed economies, expatriates are known to land in this country and demand huge wages for their skills.

None of the 21 expatriates on the list presented by KAWU earns less than Ksh1 million.

The job done by an expatriate, when offered to a local, would attract a markedly lower remuneration.

According to the KAWU figures, KQ CEO Sebastian Mikosz takes home Ksh8 million a month, while the KQ Board Chair Michael Joseph, the former CEO of Safaricom, earns Ksh3 million. “Michael Joseph is the only board chair in this country who earns a salary of Ksh3 million,” KAWU claims, alleging that his predecessor Dennis Awori used to take home only Ksh300,000 a month.

[ Henry Rotich – The shared baby of the Jubilee Coalition ]

Apparently, none of the 21 expatriates on the list presented by KAWU earns less than Ksh1 million. Seven of the Polish consultants, who caused a stir when they were hired as they hail from the same country as Mikosz, reportedly earn a combined Ksh30 million monthly, or Ksh540 million over 18 months under review.

A number of top firms, such as telco rivals Safaricom and Airtel Kenya, are run by foreign CEOs who have are backed by an army of expats. Foreigners also make up chunks of many a board, with Telkom Kenya, Total Kenya, Nation Media Group, M-Kopa and Britam, to mention a few, having expatriates on their boards. 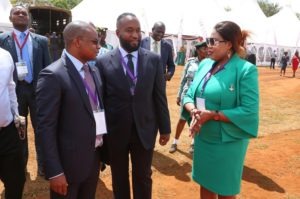