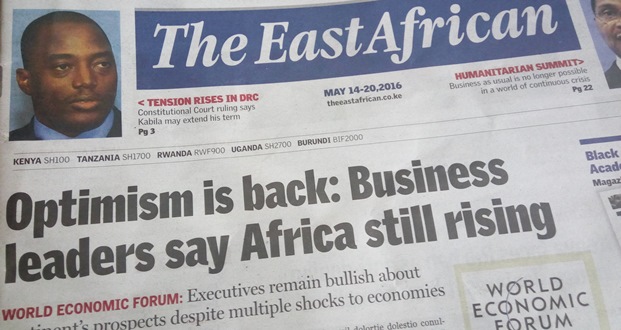 Last week, the Nation Media Group’s regional newspaper, the East African, went to the newsstands with a h********s mistake on its front page. Instead of a live splash story, the paper carried dummy holding text with whoever subbed the page only getting the headline and kicker right.

This was caused by a production mix-up as the paper was taken to print on Friday. It was partly a manifestation of a major handicap at NMG where most editorial sections are under-staffed after the company reduced the number of copy editors in a cost-cutting measure.

The page-one mistake made the old saying sound so very true: ‘Doctors bury their mistakes. Lawyers jail theirs. But journalists publish theirs for all the world to see.”


The company had to quickly correct the mistake and withdraw the i*l-fated edition. By Monday morning, a well-edited article had replaced the holding text and readers who had not seen the weekend edition did not even know what had happened.

The newspaper had been dispatched to the other East African countries – Tanzania, Uganda, and Rwanda – where the newspaper circulates.

It is not clear whether any disciplinary action was taken against the persons responsible for the error but a post by The East African Chief Sub Editor Mutinda Munyao on Wednesday suggested there was some kind of grilling. “Have you ever been in trouble, then at the grilling session they order KFC? So you’re there trying to find your appetite. Zero,” he posted on his Facebook page.

The Chief Sub Editor is the custodian of a newspaper, tasked with selecting articles and ensuring they are well-edited and pages nicely designed. There are revise and production editors, but the buck almost always stop at the Chief Sub Editor’s desk whenever there’s an editorial or design lapse.

N*****y journalists at the newspaper have been trying to make light of the whole situation possibly with the aim of preparing the gatekeepers to be more careful when they go to press later today.

This is what writer Allan Olingo posted on his Facebook account on Thursday:  “Off (sic) late, journalism has taken my snitching prowess a notch higher. Just snitched on a top secret meeting somewhere in Europe. Get the juicy details in your Saturday’s copy of The EastAfrican. Raundi hii bossman Mutinda J and George will not allow Italian stories as page one leads!!”