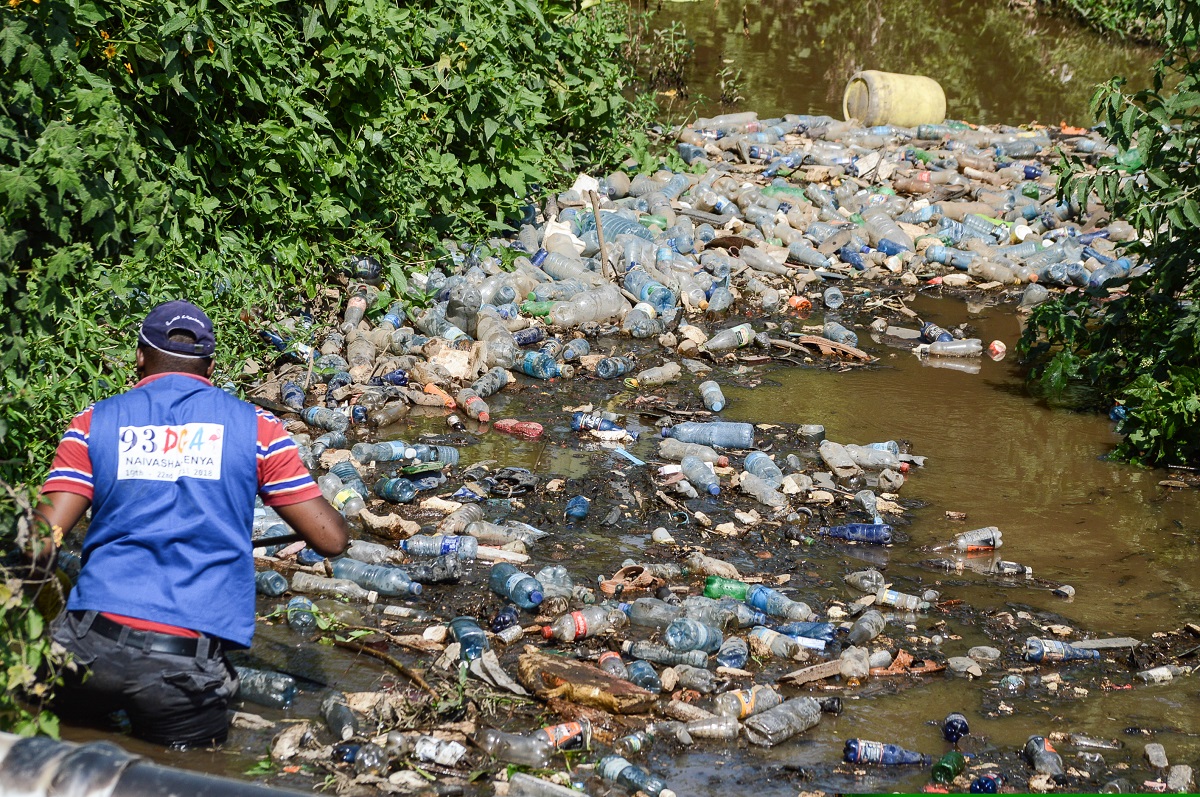 A volunteer cleaner wades through a batch of plastic trash floating in River Njoro in Nakuru, Kenya. [ Photo / Benard Ogembo ]

Africa’s increasing population and bulging economy could trigger a spike in plastic pollution if countries fail to fix their respective waste management systems. Only two out of the 10 river systems (the Nile and Niger) that carry 90% of the plastics that end up in the ocean are found in Africa.

A recently concluded 17th Ordinary session of the Africa Ministerial Conference on the Environment (AMCEN) noted that the continent has shown tremendous progress and is now leading the world in plastic bag regulation. However, it still needs to address its waste management systems, which is still underdeveloped.

So far, 34 countries on the continent have total or partial bans on different forms of single-use plastic items and packaging.

More waste than fish in water

Wide World Fund (WWF) Africa Regional Director Ms Ann Ruhweza says the commitment from all African countries gives a strong signal to the world and provides momentum to the calls for an ambitious policy response to plastic pollution at international, regional and national levels.

She says there is hope given the steps the continent has made but admitted more needs to be done.

“These commitments need to be accompanied by tailor-made financial investments to drive innovations for promoting a circular economy in African countries – the surest way of realising multiple policy objectives of stalling biodiversity loss, bending the curve on nature loss, enhancing resource efficiency and stopping plastic leakage into nature,” she said.

China, once the world’s leading recycler, announced January 2017 that it would stop accepting plastic waste from other nations, creating uncertainty about where millions of tonnes of plastic trash will go. It is understood that after the China’s ban, the global plastic waste exports fell – dipping by almost half by the end of 2018, compared with 2016 levels, according to Greenpeace analysis.

A growing number of countries are beginning to stand firm and demanding nations take back their waste. Despite all these, the Global Alliance for Incinerator Alternatives (Gaia) says after a clear dip, imports begun rising again in the last quarter of 2018, suggesting challenges in enforcing respective country bans.

As the plastic threat grows, more cities are banning plastic shopping bags and drinking straws, and profit-based corporations are redesigning packaging to reduce waste. But conservationists say such steps will go only so far. The real solution, they say, is to stop producing so much plastic.

Death of a whale and sea turtle

In two oceans a world apart, a pilot whale’s death and a sea turtle’s agony garnered international attention and helped dramatize a growing threat to the global ecosystem: plastic waste, which scientists say is fouling the seas and overwhelming landfills.

In Costa Rica, marine researchers used pliers to remove a four-inch plastic straw from the turtle’s nose as it writhed in pain, blood dripping from its nostril. A video of the turtle’s ordeal went viral, viewed more than 33 million times.

But as all these happen, what is the future of Africa in stopping plastic leakage into nature while reducing leakage of waste, especially plastic whose presence in nature has reached crisis levels.

If production trends continue, by 2050 Earth’s oceans could contain more plastic, by weight, than fish.

According to her, the commitment from all African countries gives a strong signal to the world and provides momentum to the calls for an ambitious policy response to plastic pollution at international, regional and national levels.

According to the latest research, the world had produced 7.8 billion metric tons of plastic by 2015 – more than 1 metric ton for every person alive. If production trends continue, by 2050 Earth’s oceans could contain more plastic, by weight, than fish.

But, why is it that, much of plastic waste is routed to other developing countries, which lack the infrastructure to handle it, or to landfills?

For the wealthy nations which send their recyclable waste to Africa, it is cheap, helps meet recycling targets and reduces domestic landfill.

For Africa, it is a money minting business, oblivious of the fact that contaminated plastic and rubbish that cannot be recycled often gets mixed in and ends up in illegal processing centres.

READ >> Big Brands are The Worst Polluters of the Environment

Frequently, materials that cannot be recycled end up being burned illegally, dumped in landfills or waterways, creating risks to the environment and public health. Investing in the waste and recycling infrastructure needed in developing countries will be a key piece of that dilemma.

Out of 127 countries worldwide who have instituted legislation that bans single-use plastic bags including manufacture, importing and distribution, 34 of these countries are from Africa, followed by Europe with 29.

According to United Nations, Kenya was using up to 100 million bags each year in supermarkets alone. However, the good news is that the country introduced the ban in 2017 and currently has the world’s most punitive penalty where manufacturers, importers, distributors and users are slapped with a $38,000 fine or four year jail term if they flout the legislation.

Environmental Activist James Wakibia who was the face behind ban plastic Kenya campaign welcomed the move saying that apart from placing the country on the global map, it also reduced plastic pollution in our environment.

“I believe after relentless push, the government finally bowed to the pressure. I must commend the then Environmental Cabinet Secretary Ms Judy Wakhungu who did a good job because this was the most progressive and successful campaigns the country has ever carried out”, Wakibia said.

Wakibia added that industries must also commit to protect the environment from their products.

Rwanda’s zero-tolerance on plastic bags, which include fines and public shaming, has contributed to freeing the streets off the plastic menace and is credited with Kigali being named as Africa’s cleanest city by the United Nations.

As the corporations that recycle plastic waste upgrade up production, they are also stimulating a dying recycling system. Given that Only 9% of plastics get recycled, and significant reductions will require systemic change.

Environment experts are increasingly calling for a reduction in plastic use, as the waste accumulates in the oceans, poor countries and even human bodies.

Like many developing nations, Kenya has no recycling infrastructure; private companies collect unsorted household rubbish and truck it to enormous dumps. Waste pickers scavenge through trash bags outside homes and stinking mounds of refuse at dumps to recover the plastic.

Only 10% of all the trash produced in Africa then was recycled. However a waste disposal system cannot just be installed in Africa as roughly 80,000 people are informally employed to recycle trash and they could risk being replaced by more efficient garbage disposal units.

However, the good news for the continent is that more and more firms are rethinking how products are made; redesigning them to make them more durable, easier to dismantle, repair and reuse.

Radical new concepts are rarely embraced with enthusiasm, but the circular economy could be an important exception. The reason is simple; ever-growing demand, driven by population growth and wealth creation, cannot be met by the Earth’s finite natural resources.

In Kenya, for example, Mr Green is a firm that specialises in collecting recyclable waste like cardboard cartons, aluminum and hard plastics and processing to gather valuable raw materials.

WWF welcomes the consideration of circular economy and believes this commitment by the ministers provides an excellent opportunity to shift away from traditional linear economies of make-use-dispose.

At the recent Trondheim Conference on Biodiversity, the continent had an unequivocal call for a ‘New Deal for Nature and People’. A deal that makes it socially, politically and economically unacceptable to sit back and watch the destruction of nature.

The deal gives Africa a chance to rewrite the past narrative by embracing circular economy principles – dissociating from non-renewable resources key among them fossil fuels, product redesign, embrace reuse models, considering material life cycle impacts, accountability across the value chain and upping recycling across all sectors of production and consumption.

In 2016, 235 million tonnes of plastic waste was generated globally, according to the United Nation. On current trends, this could reach 417 million tonnes per year by 2030.

Benard Ogembo is a Kenyan journalist based in Nairobi. Email: [email protected]